We finally know what a black hole looks like.

After decades of conjecture and simulations, an international consortium of scientists released the first ever photos of a black hole..

Scientists have obtained the first image of a black hole, using Event Horizon Telescope observations of the center of the galaxy M87. The image shows a bright ring formed as light bends in the intense gravity around a black hole that is 6.5 billion times more massive than the Sun

Padma Shri (Hindi: पद्म श्री) is the fourth highest civilian award in the Republic of India, after the Bharat Ratna, the Padma Vibhushan and the Padma Bhushan. It is awarded by the Government of India, every year on India’s Republic Day.

Taunted for not being able to give birth to a child Vriksha Mata Saalumarada Thimmakka started to plant banyan trees in lieu of children ..106 year old Vriksha Mata has planted 8000 trees. Today She has conferred with Padma Shri

In a motherly gesture, she blessed President while receiving the award.

This Woman Wrote A Hilariously Explicit Grocery List For Her Husband..

Posted on September 30, 2017 by Shailendra Nair 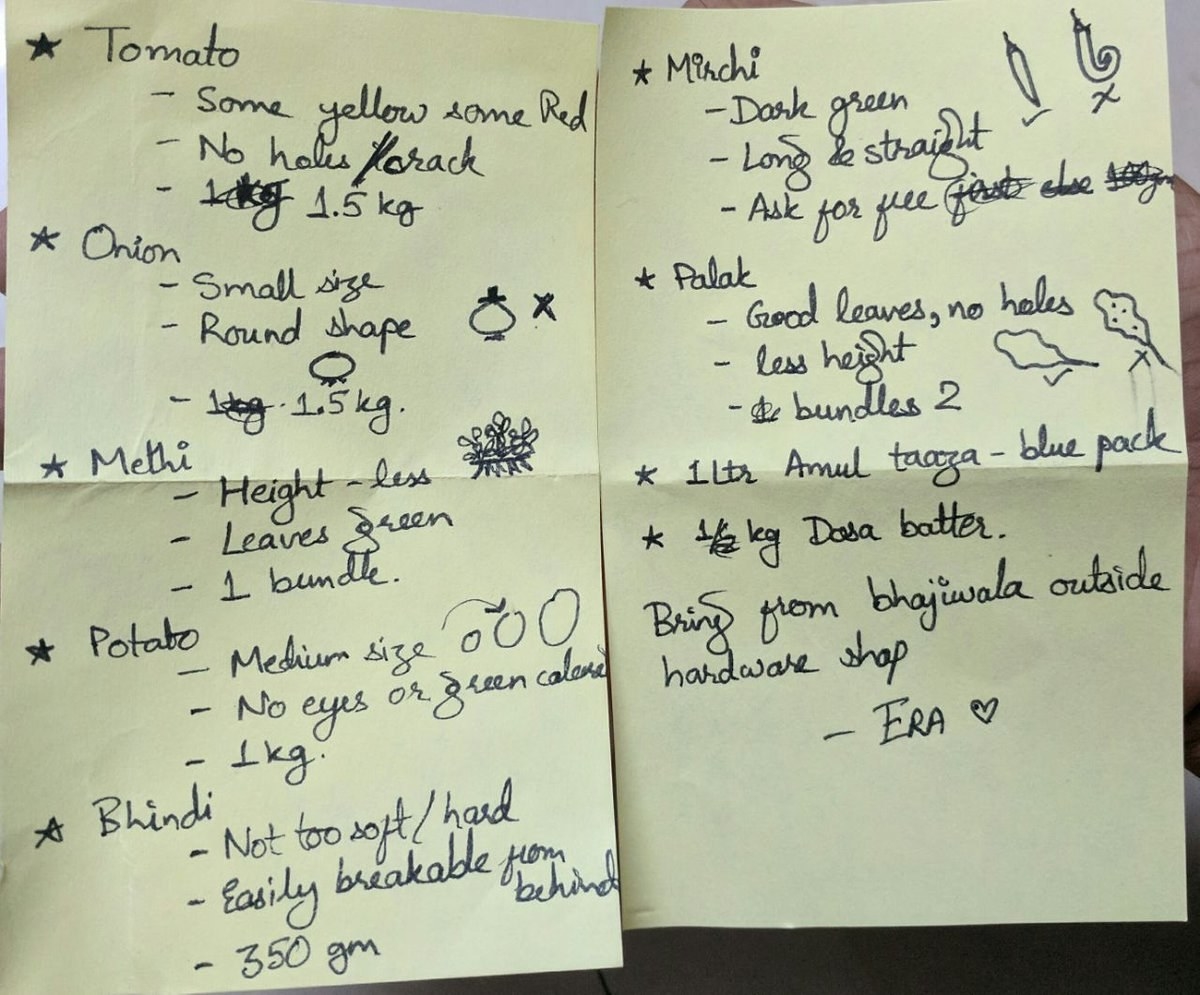 Excellent read, never thought about this angle of Karma !

After Kurukshetra war, Dhritarashtra asked Krishna, “I had 100 sons. All of them were killed. Why?

Krishna replied, “50 lifetimes ago, you were a hunter. While hunting, you tried to shoot a male bird. It flew away. In anger, you ruthlessly slaughtered the 100 baby birds in the nest. Father-bird had to watch in helpless agony.
Because you caused that father-bird the pain of seeing the death of his 100 sons, you too had to bear the pain of your 100 sons dying.

Dhritarashtra said, “Ok, but why did I have to wait for fifty lifetimes?”
Krishna answered, “You were accumulating punya (pious credits) during the last fifty lifetimes to get 100 sons – because that requires a lot of punya. Then you got the reaction for the papa (sin) that you have done fifty lifetimes ago.”
Krishna says in the Bhagavad-Gita (4.17) “gahana karmano gatih”. The way in which action and reaction works is very complex. God knows best which reaction has to be given at what time in what condition. Therefore, some reaction may come in this lifetime, some in the next and some in a distant future lifetime.
There is a saying, “The mills of God grind slow; but, they grind exceedingly fine.” So, every single action will be accounted for, sooner or later.

Srimad Bhagavatam gives example: if we have a cowshed with 1000 calves and if we leave a mother cow there, she will easily find out where her calf is among those thousands. She has this mystical ability.

Similarly, our karma will find us among the millions on this planet. There may be thousands going on the road but only one meets with an accident. It is not by chance, it’s by karma.

Thus, the law of karma works exceedingly fine; it may be slow to act, but no one can escape.

Posted on September 25, 2015 by Shailendra Nair

This awe-inspiring tale of 3 Street Dogs keeping guard to an abandoned new born baby girl is indeed a befitting and incisive reply to all those who consider these street babies as a menace to their society.
Kolkata 23rd & 24th May 1996…..

Three street dogs were found protecting a new-born baby abandoned in Kolkata on the evening of 23rd May, Below is an excerpt of a news report filed by Pinaki Mujumdar on the 25th May, 1996 edition of a Bengali daily, named ‘Aajkaal’ which carried the above hear-rendering photograph by Tapan Mukherjee.

This story was carried on the front page of this newspaper and did end up demonstrating the responsible ‘humane’ action of these three street dogs towards a human baby.

“A bright new born baby girl by the side of the dustbin. Sitting around her are three street mongrels. The same unchanging picture throughout the night. This unbelievable and inconceivable incident is not a scene from a screenplay. Nor is it the background to a story causing a sensation throughout the world. It is real-as unalloyed real as light and air, life and death.This incident stretched at Hartokibagan Lane under Burtolla Police Station from the night of 23rd May, 1996 to 24th May, 1996 morning. Not just that, the three dogs followed like responsible guardians when some people of the locality rescued the new born baby girl and took her to the Burtolla Police Station. They had, unnoticed by all arrived at the door of the Officer-in-charge at Burtolla Police Station I.K Hossain as people were busy watching the baby, who had been put on the officer’s table, move her hands and feet. This scene did not elude the eyes of the policemen and the curious people present at the police station.
This report states that it was only around 2 pm on 24th May, 1996 , when the baby was put in a car to be taken to a foster home for foundlings did these three street dogs walk back to their old neighbourhood, walking slowly….”

Posted on September 20, 2015 by Shailendra Nair

Ganesha Chaturthi is the Hindu festival celebrated in honour of the god Ganesha, who has an elephant-head. The festival, also known as Vinayaka Chaturthi, is observed in the Hindu calendar month of Bhaadrapada, starting on the shukla chaturthi (fourth day of the waxing moon period). The date usually falls between August and September. The festival usually lasts for 10 days, ending on Anant Chaturdashi (fourteenth day of the waxing moon period).

The Dark Side of Social Media Just Got Darker

There is no shortage of content on the mental and emotional hazards of social media, all readily found in…uh…social media.

Yet this dark cloud is getting darker by recent studies, supported by qSample’s own finding. It’s casting a larger shadow over a medium that once was believed as the great democratizer of society.

Here is how it gets darker

The most recent warning comes from Future Foundation, in a study of Britons on social media usage. The study arrived at a powerful conclusion: social media has created a culture of comparison like never before, leading youth and adults down a labyrinth of brittle self-esteem.

Some of the discoveries of the study:

This can lead to feelings of insecurity—especially on Facebook, where we go to share our happiest, braggiest news. We’re constantly comparing ourselves against a stream of new babies, engagements, new jobs.

Worse than social comparison gone awry, as the Future Foundation study relates, social media users actuallywish their real life mirrored that of their social profiles—basically creating a schizophrenic society where online personas are different from real personalities. The research reveals that young men suffer the most in all demographics; but all sectors find themselves continually under the stress of matching their own projections with that of peers in various social media channels.

A recent study conducted with qSample’s general consumer panel reveals that more than 60% of respondents surveyed access Facebook 3-6 times a day. Results also show those who are logged in that frequently earn an income of $50,000 or less per year.

The study demonstrates that in general those with less social media footprints tend to earn higher.

Here is where it gets darkest

Obviously, a case (with many case studies) can be made on the positive effects of social media on both the individual and community. Regardless, it seems most miss the true nature of social media, as well as the internet itself. Understanding this nature is key to solving the dark matter that is social media pervading online universes.

Marketer Josip Petrusa nailed it in a blog article. He is not alone, drawing from the works of cyber-psychology pioneers like Chris Anderson, Malcolm Gladwell and Nassim Taleb.

It basically goes like this: social media and the internet do not improve or harm our emotions. No, they simply amplify them.

And though the internet increasingly became an amplifier of everything the world had to offer as a result of easy-access, the sudden increase of amateur creations and exposure to a seemingly infinite world, social media has established itself as the ultimate amplifier.

This makes perfect sense when taken to a mass media level. Think about it. When an endangered lion is shot or a police officer acts irresponsibly, social media broadcasts latent emotions to all corners of the world. Animal rights and minority activists have been around for decades, moving the culture needle to more egalitarian spectrums. Social media simply leverages covert sentiments, injects them with the steroids, and then disseminates them in a mob-like wave across the web. In the end, it’s always the boots on the ground that make a real difference.

Another example would be the Arab Spring. Social media took credit for it—according to many digital commentators and marketers—but the mechanism for Egyptian freedom was already in the works and continues to imperfectly grind away. A University of Washington study even concluded that “social media did not cause the upheaval in North Africa.”

In essence, social media and the internet are not bringers of historical change but bringers of emotional range. Like all media, they capture a snapshot of human progress.

The greatest evidence for social media having an “amplifier effect” instead of societal impact is the reality of how issues swell and shrink rapidly. Our research shows how the internet has drastically shrunk the attention span of people to the point goldfish focus more than humans! Today’s dire issue is quickly forgotten, except again in the minds of activists of various stripes. I mean, is anyone still irate at Brian Williams or Eric Holder for whatever? Today’s confederate flag is tomorrow’s obscure meme on Facebook, at least in the mind of the general public.

Here is where the light comes it

Beyond morbid self-reflection and mob-rule mentality, social media seems officially darker than ever, if the Future Foundation research holds up.

How do we even know our emotions when they are fragmented and then amplified like in a psychic sugar-rush that later becomes a sort of ice cream headache for the heart? How can we combat gross projections on our social profiles as we attempt to compete with friends and followers who seem to have it all? As onetherapist said on the emotional amplifications of social media, how do you stop from going into a “neurotic limbo”?

As with the negative aspects of social media, there is a galaxy of literature out there on solutions to the negative aspect of social media. It really all comes down to some addictive spectrum or another that either needs to be curtailed, eliminated or managed differently. As a Forbes columnist and tech executive wrote recently on Forbes: “Social media is rapidly becoming as bad as smoking for the human condition.”

Your mileage may vary.

But to solve the effects of Tyler Durden-like emotions, it seems the solutions was already stated in this article: Be an activists, any kind of activist even if it’s something small like “save the stamp collection.” Find a passion that only you care about—and know, as evidence reveals—that any real change will be in the material world and away The Matrix that is social media. That will eventually align your emotions and identity, and both will shine through on social media and beyond…in history…even if it’s in a list article on some blog.

It’s really that simple. Any more complication risks this being amplified on the internet to the point it gets lost in a short-attention span society.

Amazing capture by Photographer… Nature at its best !!